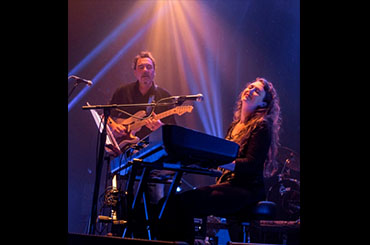 Within singer-songwriter Kristen Rae Bowden is the spirit of the mountains and a wild streak of wanderlust. Her 11-song debut, Language And Mirrors, snapshots nostalgic moments of rugged rural life and bracing jolts of adventure. It’s an electrifying yin yang collection of roots rock and stately orchestral rock that lyrically reveals the singer-songwriter’s fiery blend of sensitivity and strength. Her artistry brims with clever metaphorical turns of phrases, raw emotionality, and imaginative musical arrangements. Kristen counts as inspiration such diverse artists as Led Zeppelin, Fleetwood Mac, Primus, Radiohead, Joni Mitchell, John Prine, and legendary musical theater composer Stephen Sondheim. In performance she exudes white-knuckle passion, pounding the sh#& out of her piano while sharing her majestic musicality.

Joe Lawlor was born into a creative family from the Washington DC area. He began playing guitar at age 10 and instantly knew he had found his calling. Joe’s progress was unbridled and after high school, he attended the prestigious Berklee College of Music. As a founding member of several progressive funk and rock bands, including the Washington DC based band Egypt, Joe’s notoriety grew as exponentially as his guitar playing bloomed. He quickly became a sought after session guitarist and has added his signature style to countless recordings. Joe’s influences range from guitar heros like Jimi Hendrix and Jeff Beck, to delta slide blues and the creole/second line stomp of New Orleans.At the core, Joe Lawlor is a master of American guitar styles, but his embrace of the ethnic modes found in Sitar, and Qawwali music, give him his unique sound. No stranger to R&B, Funk, Blues, Metal and Hip Hop, Joe combines the right mix of all his musical influences to hit the mark, every time. For the past 14 years Joe has traveled the globe with the Dave Matthews band as part of their audio crew specifically working as their live recording engineer and archivist.